THE FILM IS DONE!

Well, there's the film. All shiny, finished. I have so many people to thank. First of all, the constant professional and EXTREMELY talented voice of Allen Stewart Coates. 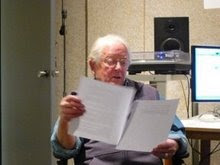 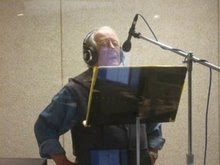 I have now had the honor of using his voice in two films (The Celestial Ox from 3rd year), and I can honestly say that neither film would amount to much without a stern, booming yet also gentle and charming narrator behind them. Its gonna be hard to come up with stories WITHOUT imagining his voice reading them, but I'm gonna try!

Next is my other amazing get, Dan Rodrigues. This guy not only composed an authentic-sounding score, but also came up with the fantastic Mandrake scream sound you hear throughout the film (it was sampled from his little cousin screaming her head off in the mic.) 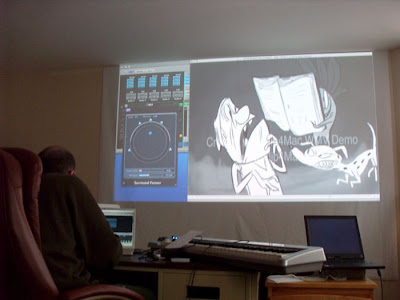 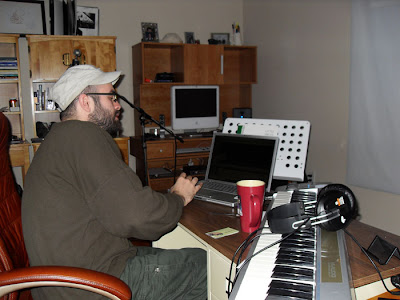 He mixed all the sound elements together so the film sounded proffessional, and less student-film-y. Once I got these two guy's contributions to the film, which happened probably within the first month of production, it raised the bar quite high. This made me want to make the best visuals I could to match the audio bliss the audience was gonna be given!

Which brings me to my crew of assistant artists! Amir Avni, with his steady hand and incredible linework was a BIG help getting my rough animation cleaned up. Then there's the SLAVES whom I gave files to color and wouldn't let them leave until they were finished and PERFECT! They deserve a big round of applause for putting up with me. Jen Bamford, Nicole Breedyk, and Andrew Glisinsky: I'm sorry about the shackles and leg irons. You guys all did a yoeman's job! THANK YOU!! 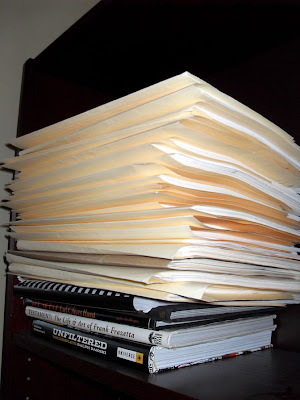 Here's what all the animation from my film looks like. Its even more dramatic when I put a few books under it and shoot it from a low angle!

Goodbye Sheridan! I learned a lot from you. Made some great friends, had some good laughs. I think I gotta go find a job now.
Posted by brockorama at 1:55 PM 463 comments:

The self-traced linework adds about triple the coloring time, but man it looks sweet when its done.

2 seconds down, BILLIONS more to go


My film is hovering around the 3 minute mark. So that's like, literally BILLIONS of seconds according to my math. He's a bit more "jiggly" than I'll usually make him, but since its a tighter shot I'll probably leave it. I sorta rushed this so I can do a cleanup/color test during the xmas break.
Posted by brockorama at 5:26 AM 79 comments:

WILL HE FINISH IT? Part 1 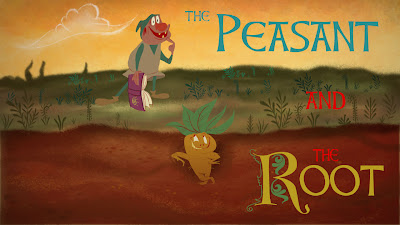 So I'm updating the blog! And only 7 months since the last update! Expect to see the next post sometime in June 2009 at this rate.

I'm working on my 4th year film. Its about the legend of the mandrake root. That's the one that screams when you pull it from the ground, and the scream kills ya. But you really want one cuz its like, magic and stuff. According to legend, there was one special way to acquire one without getting killed. You have a DOG get killed instead! Look! 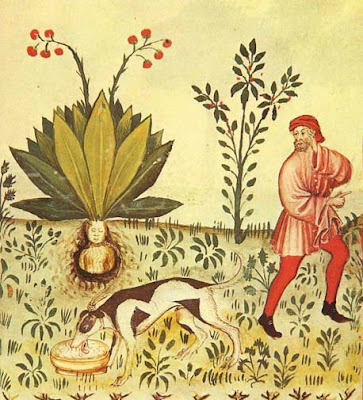 The guy in this photo is going "EXIT! Stage RIGHT, even!" Hahaha. But seriously he is. He's making the poor dog do all the work pulling out the root cuz he tricked it with some food. Neat huh? PATHOS! Someone should make a cartoon about this!

ALRIGHT I'LL DO IT

Here are some heads 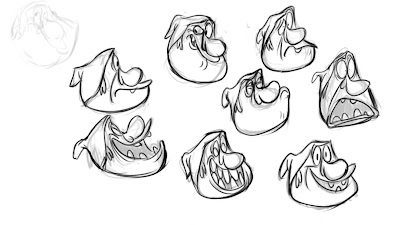 I thought our films looked pretty good before, but splice 'em all together and back them with the dulcet tones of Carly Simon and you got yourself a winner, boy. To everyone in our year, congratulations! Take a bow. Its over!

Films included and their production blogs (in order of appearance)

Kill your friends! And play with your tail

FLASH!!!! AHHHH-ahhhhhhhhh!!!! King of the IMPOSSIBLE!!!!!!!!
please forgive me my Flash Gordon/Queen moment.

Here are some clickable things. This past summer I had a great time interning at Six Point Harness in Hollywood, CA with my pals Bryan and Rory. These were made our first few days, to mostly get our feet wet in Flash. We were told to make little animated videos of us killing each other. I was really rusty with the program! So the first one really is all drawing, then they start to get lazier and lazier once I learned what Flash can do.

The last one is a rough test for a scene from my 3rd year group film "The Celestial Ox"
Posted by brockorama at 8:41 PM 73 comments: 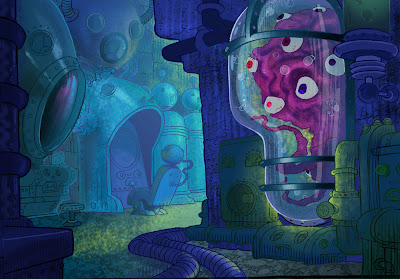 With STUFF! I just did the coloring. Linework copyright Nelvana.
Posted by brockorama at 2:41 PM 78 comments: 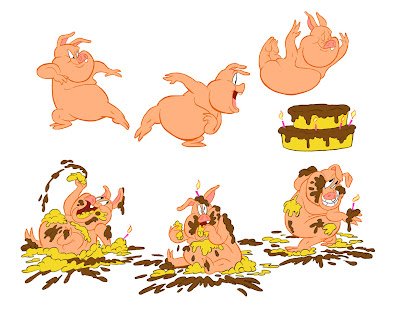 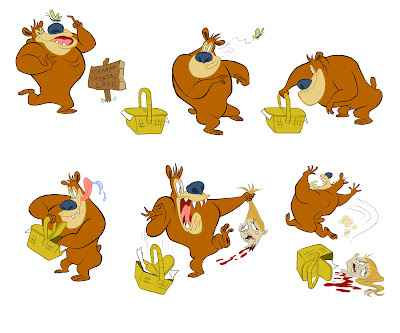 Here's a character design assignment where we got to go back and re-visit some characters we've already animated. Let it also be known that yellow cake with chocolate frosting is the world's most delicious food. MMMMMMMMMMMMMMMM!!
Posted by brockorama at 7:19 PM 75 comments:


A rough line test of the muzzle-sync assignment. Its changed a bit from the storyboard: he no longer grabs the chicken. This makes my life easier since I dont gotta draw 2 characters moving around at the same time, and lets Crunchy the Pig use both his hands to emote.
Posted by brockorama at 4:19 PM 72 comments: 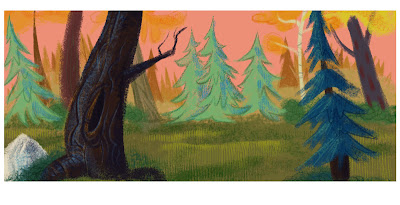 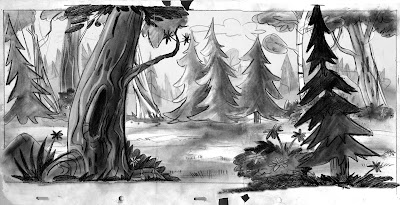 After reading Hanna Barbara background painter Art Lozzi's color theory and technique tips on John K's blog I had to try some out for myself. I'll be the first to admit this is about 1000 times more busy than any HB background, I went overboard with the textures when I found out how to make my own brushes in photoshop. But it was a cool experiment, and I cant wait to do more like this.
Posted by brockorama at 8:22 PM 67 comments:


Here's the latest stack of drawings! "The Princess Bride" is quite possibly the perfect movie. I would have also loved to have animated the line that came next: "You were not hired for your brains, you hippopotamic land mass."
Posted by brockorama at 1:58 AM 65 comments:

Here's some jolly holiday animations for ye! First up is my walk/run assignment:

Wasn't that festive?! And now, more yuletide glee with the expression change assignment:

Wheeee! Happy holidays to you and yours! And speaking of milking machines: 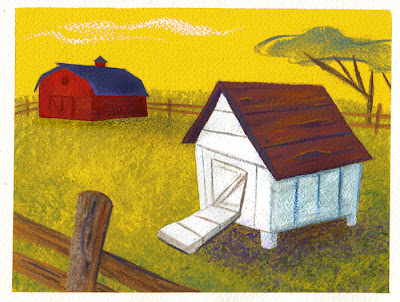 Scrambled or fertilized?
Posted by brockorama at 3:50 AM 68 comments:

YAY! Storytime! Turn your brain off for a sec and watch. This is the leica reel of my storyboard. Its rough drawings and voices for now, and next semester I may be animating some of the dialogue scenes.
Posted by brockorama at 9:05 PM 83 comments: